Clinical psychology has a range of what are sometimes called "Clinical-Cognitive" theories of particular diagnostic categories in mental health. These theories are used to both account for patterns of symptoms and to develop and test improved interventions. Part of our mission involves exploring the relationship between the theories of applied clinical science and those more characteristic "basic" theories developed from laboratory research. One area we have examined in some detail is the part played by different scientific processes and representations used in what is currently called "translational medicine". Our analysis distinguishes two sorts of representation, theories in the science base and bridging representations needed to map from real world behaviour to basic theory and from theory back to the real world. This approach argues that macro-theories of the "normal" human mental architecture could help synthesise basic theoretical accounts of diverse psychopathologies, without recourse to special purpose clinical-cognitive theories of particular psychopathologies or even specific symptoms. Using the Interacting Cognitive Subsystems model (Teasdale & Barnard, 1993), we have developed some concrete examples of macro-theoretic variables. These are used to illustrate how the "essence" of quite complex basic theory can be translated into a simpler representational format to help clinicians conceptualise a psychopathological state and pinpoint relevant variables that might be changed by therapeutic interventions. Some suggestions are also offered about how the inevitable problem of complexity in multiple component theories might be directly confronted. A schema for bridging science and application is shown in the figure below. 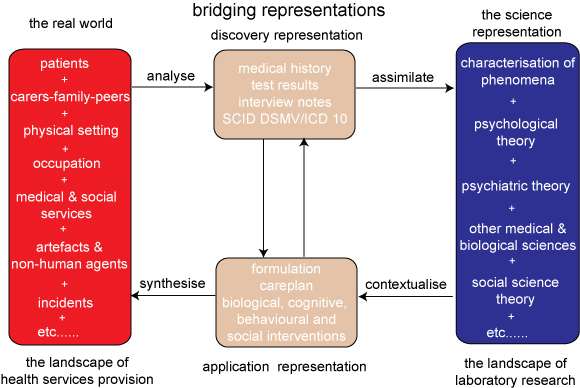 For concrete illustrations in relation to depression and bipolar disorder see:

For the application of the same kind of thinking to the Schizophrenia spectrum see:

Barnard, P. (2003). Asynchrony, implicational meaning and the experience of self in schizophrenia. In A. David, & Kircher (Eds.), The self in neuroscience and psychiatry (pp. 121–146). Cambridge: Cambridge University Press.

For its application to Anorexia Nervosa see: