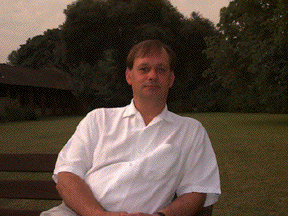 Within the Emotion Group Programme I now work mainly on Executive Control and Emotional Meanings in Cognitive and Neural systems. The work is organised under three project headings:

[b] Schematic models and executive mode – in both healthy participants and those with psychopathology (including anxiety, depression, mania and schizophrenia).

In addition to the core funded programme, I also have a number of interdisciplinary collaborations. With two groups of computer scientists I am working on the modelling of mental architecture and affect; with biologists/comparative psychologists/archaeologists I am working on the evolution of our mental architecture; and in an arts-science collaboration with choreographers, I am do a small amount of work on choreographic cognition, movement and emotion. We have just started work on a project on counteracting cognitive-affective deficits in dementia funded by Microsoft Research and using SenseCam

Some notes about Interacting Cogntive Subsystems

My interests lie in the development of useful cognitive theory and by that I mean a theory of broad scope and practical applicability. Most theories in psychology try to explain a narrow range of phenomena in a particular area of mental competence, like memory, language understanding or visual attention. Such theories can be thought of as Micro-theories in the sense that they address only parts of the full range of mental capabilities. In most practical contexts all these mental competencies work together. Although many theories have something to say about how one kind of mental capability relates to another, few do so in a balanced way - i.e. at an equivalent level of detail. I have been concerned to develop a form of Macro-theory which seeks to do just that. Macro-theory is aimed at understanding how all the different components of the mental mechanism are configured, what representations those components use and the overall dynamics of their interactions in real time. The particular theory that I've been developing is called Interacting Cognitive Subsystems - or ICS. 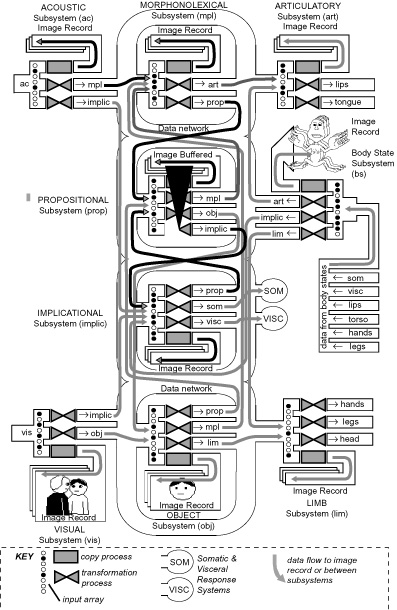 The idea of developing macro-theory is, like attempts in AI to build unified theories of cognition, a challenging and ambitious project. Its development and progress cannot, by its very nature, be focused on a small range of empirical paradigms. Partly because I have been interested in developing theory that can be used in practical domains, like clinical psychology, or the design of technology, my research has an unusual character - it encompasses a lot of different textbook topics.

The theory assumes that our mental architecture is composed of nine subsystems. Each subsystem has the same internal structure. Information arrives in a subsystem, is copied into an image record and is transformed for use in another subsystem.

The subsystems differ in their inputs and outputs - they each specialise in storing and processing a qualitatively different form of mental representation.

ICS stresses that mental activity occurs in mulitple domains at the same time - that is concurrently.

The key ideas behind ICS are really quite simple. Nonetheless with 9 subsystems, each with multiple components, its still very hard to think about how a complex system like that depicted in the adjacent figure actually works.

for its application to emotion:

for its applications in clinical psychology:

Teasdale, J.D. (1999). Emotional processing, three modes of mind, and the prevention of relapse in depression. Behaviour Research and Therapy, 37, S53-S77.

To understand a dynamic system you need to think about two things - (1) Principles that govern information flow and the principles underlying the strucuture of mental representations; and (2) How mulitple components in a system interact in real time. Mental activity can be thought in much the same way as the behaviour of a team. The individual members of the team are each doing something different but their conjoint activity is co-ordinated and constrained by common rules.

You can explore a simple interactive animations package which shows information flow among the subsystems of ICS. This is a cut-down version of a bigger package used to give talks. This version is focused on how central executive functions can be implemented in a distributed system. It is primarily intended for people who have already read a paper or two on ICS, or have heard a talk. It isn't really intended as a stand alone tutorial. If you do look at it, be sure to go through the overview first! You will need shockwave, and the full demo takes a while to explore - but you can escape at any time. You can download zipped files of a playable animation for IBM compatibles or for Mac OSX machines.

We hope to have these animation running within the browser shortly

There is also a tutorial document available that we used to teach people the basic properties of mental representations in ICS. This was directed at the design of graphic displays, but the principles it describes are once again general:

I am currently working on a range of projects, most oriented towards emotion, clinical psychology and developing computationally explicit formulations of ICS:

If you want more information look at some of the papers referenced below or, if you are interested in its application to cognition and emotion - look at the book Teasdale, J.D. and Barnard, P.J. (1993). Affect, Cognition and Change: Re-modelling Depressive Thought. Hove: Lawrence Erlbaum Associates.

My earlier research on Human-Computer Interaction (1975-1998)

My earlier research on human-computer interaction included numerous observational studies of commercial products; studies of computer system designers; laboratory experiments comparing the performance consequences of interface characteristics; and the development of theoretical techniques for addressing fundamental aspects of cognition in human-computer interaction. I collaborated with IBM for the best part of ten years and then spent seven years co-ordinating Esprit projects 3066 and 7040 - AMODEUS. In these projects, my own research used AI technology to model users' mental activity on the basis of cognitive theory (Barnard, 1985; 1987 Barnard, Wilson & Mac Lean, 1988). I still periodically collaborate with Jon May in Sheffield and David Duke at the University of Leeds). The work on HCI can be accessed from the Unit's Bibliography.

Selected publications from the more distant past and full listing of more recent publications:

Barnard, P., (2003). Asynchrony, implicational meaning and the experience of self in schizophrenia. In A. David & T. Kircher (Eds.). The Self in Neuroscience and Psychiatry, pp121-146. Cambridge: Cambridge University Press.