A semantic variant of the "Attentional Blink Effect"


Several paradigms show that responses to one event compromise responses to a second event for around 500ms. Such effects are generally attributed to attentional capacity limitations associated with processing information in the first event. The empirical paradigm is widely referred to as the "Attentional Blink."

In a task where targets could be distinguished only by their meaning, we varied the semantic relationship between distractors and targets following at different lags. People were asked to report a word that referred to a job, occupation or profession (the target category) in rapidly presented lists of other words (describing things or happenings in natural environments). Distractor items that referred to some aspect of being human, but not to a specific "job," were placed at varying distances before a target occurred. 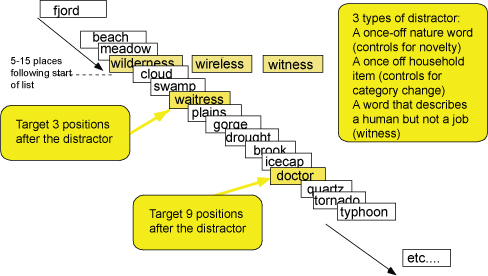 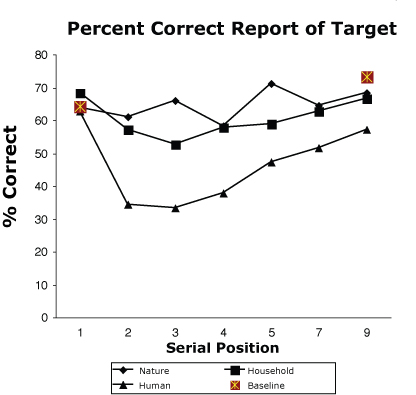 The results support a two stage model in which generic patterns of implicational meaning (see Interacting Cognitive Subsystems) are monitored as the list items appear. We argue that the blink is caused when attention is redirected to evaluate whether or not the propositional meanings associated with a salient distractor do in fact match what is required for a role to be job occupation or profession - that is, paid work.

For a full report of the actual data see:


A computational model of the semantic blink


We have developed a computational model of this semantic blink based on the idea that attention is redirected among the two levels of semantic representation proposed within ICS (Implicational - "IMPLIC" in the diagram and Propositional - "PROP" in the diagram. This model relies on a number of innovations (a) the idea that current representations of meaning are held in "delay lines" that preserve representations of two levels of meaning in a temporally ordered format; (b) distributed executive control is implemented using process algebra and (c) attention is mediated by buffering of representations in those delay lines and (d) meaning is dealt with using Latent Semantic Analysis of the sets of targets and distractors. 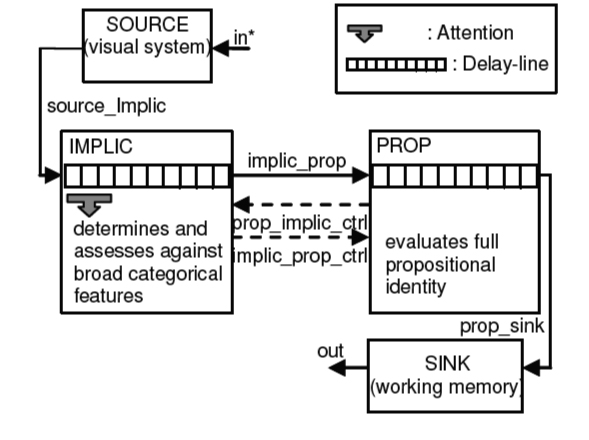 There are several published papers reporting variants of this model. The first implements the basic idea of executive control distributed between two levels of meaning. A full report of this model can be found in:

Subsequent papers have discussed the use of layered models: the coarsest layer simply involving a mathematical characterisation of blink curves, with more detailed model then adding a mechanism of distributed executive control and a third, most refined model, adding latent semantic analysis. A report of these models can be found in

and in its most developed form in: