There is a long-standing theoretical debate concerning the involvement of effortful and principled reasoning versus automatic and intuitive emotional processing in moral cognition. In a series of studies, we addressed this issue by investigating whether the mental models formed during story comprehension contain a moral dimension and if so, whether this process is affected by cognitive load. We asked participants to read a number of short stories about fictional characters in a range of moral situations (for example, a husband being tempted to commit adultery). Each story concluded with a 'moral' or an 'immoral' target sentence.

Our results demonstrated that readers take significantly longer to read immoral relative to moral target sentences, even under conditions where both the length and valence of the target sentence were tightly controlled. Moreover, the magnitude of this effect was not compromised by cognitive load. 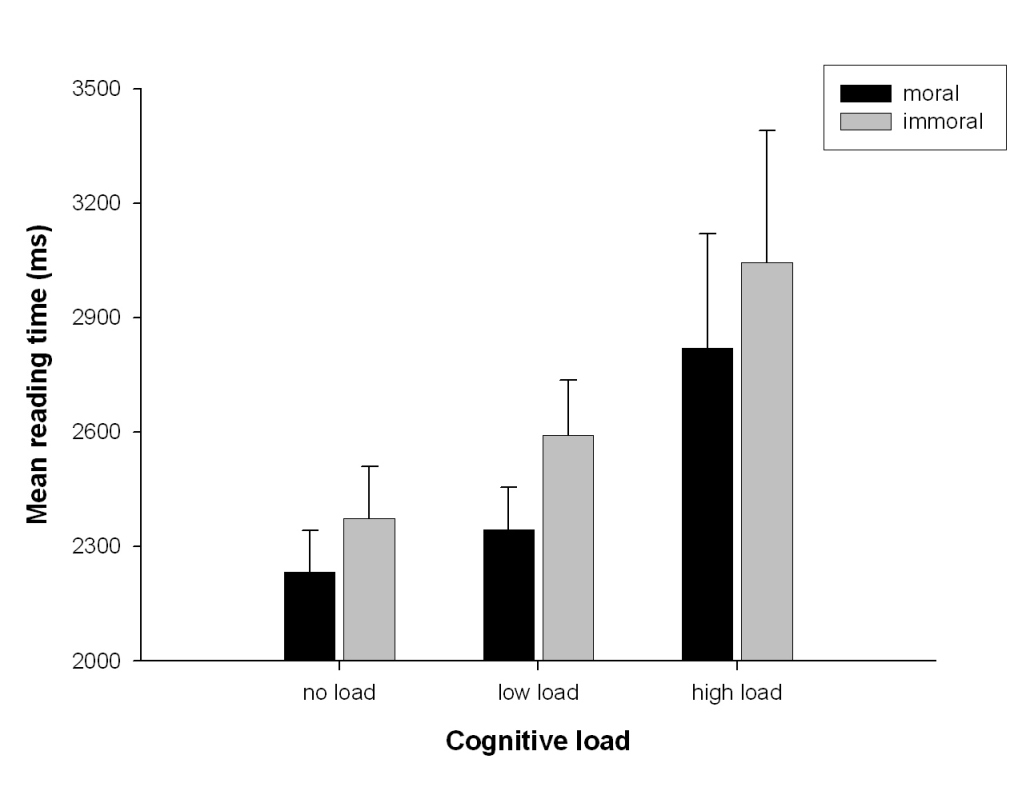 This figure illustrates mean reading times for (matched) moral and immoral target sentences in the no, low, and high cognitive load conditions. Importantly, the significant difference in reading times between moral and immoral target sentences did not vary statistically with increases in cognitive load. This indicates that the slower reading times for immoral relative to moral story endings were unaffected by the presence and size of the memory load.

Researchers in the area of social cognition have shown that many social psychological phenomena occur automatically and without awareness. Our findings suggest that the same may be true for moral processing. We interpreted our findings as evidence that people code moral dimensions and information efficiently during narrative comprehension and that such coding does not require cognitively intense or effortful forms of principled reasoning. Our results are furthermore consistent with the view that relatively automatic and intuitive emotional processes play an important role in constructing moral representations of social scenarios and address the long-standing theoretical debate in the moral processing literature.

For a full report see: