The key ideas behind ICS are really quite simple. Nonetheless, with 9 subsystems, each with multiple components, its still very hard to think about how a complex system of this type actually works. In our view, complexity will inevitably result when multiple entities interact over time. Two sources may help to grasp what is involved - one is to access animations at the bottom of the main ICS page that graphically illustrate "concurrent processing". The other is to consider how nine subsystems could have evolved from very much simpler ones that lack verbal and spatial imagery as well as propositional meaning.


While we argue that nine subsystems are required to account for all the intricacies of human cognition and affect, we would probably (at best) need just four to account for the mental and behavioural capabilities of most mammals. This very much simpler mental architecture is shown below. It has a single multimodal subsystem at its centre that augments more direct routes for action control on the basis of cross-modal contingencies. 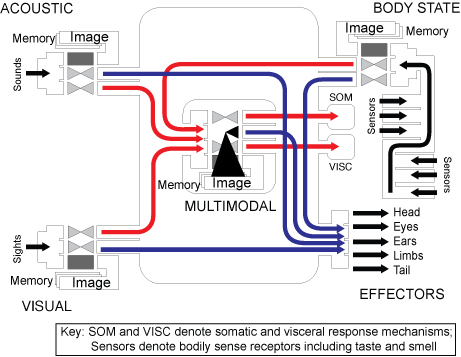 A trajectory for the evolution of human cognition and affect


In a recent paper we have proposed a detailed mechanism, an information processing analogue of cell division in biology, which could have led successive daughter subsystems to evolve along an evolutionary trajectory that culminated in the 9-subsystem architecture shown above. Thinking about how the control of action may have been successively augmented by additional types of representation and processes is one way of gradually coming to grips with the intricacies of a highly parallel dynamic architecture. The evolutionary trajectory outlined below follows a sequence which assigns a 6-subsystem architecture to modern great apes and our last common ancestor with them. The logic that follows from our proposed mechanism asserts that there must have been (now extinct) species with 7- and 8-subsystem architectures. The computational argument on which the evolutionary trajectory, shown below, is based supports speculative inferences to be made about the properties of hominin cognition as well as about their emotions. 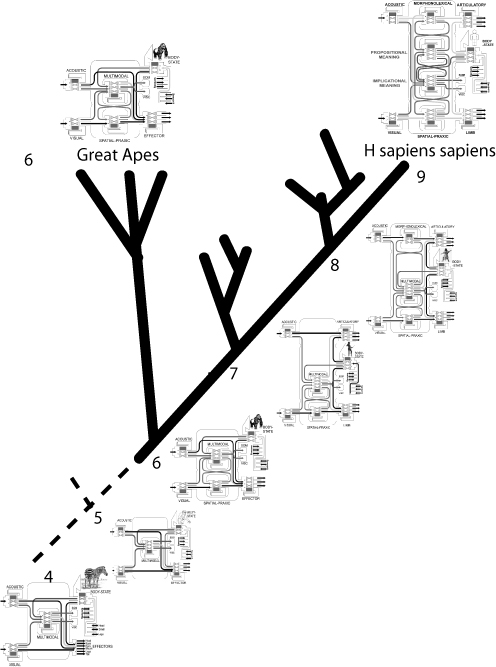 Two further papers on this topic are


Some of the wider issues that need to be addressed in relating brain, cognitive and behavioural theory to interpretations of the archaeological record of tool use by early hominins are addressed in

Barnard, P.J (2010). Current Developments in Inferring Cognitive Capabilities From the Archaeological Traces Left By Stone Tools: Caught Between a Rock and a Hard Inference, In Nowell, A., and I. Davidson (Eds). Stone Tools and the Evolution of Human Cognition. Boulder, CO: Colorado University Press. 207-226.