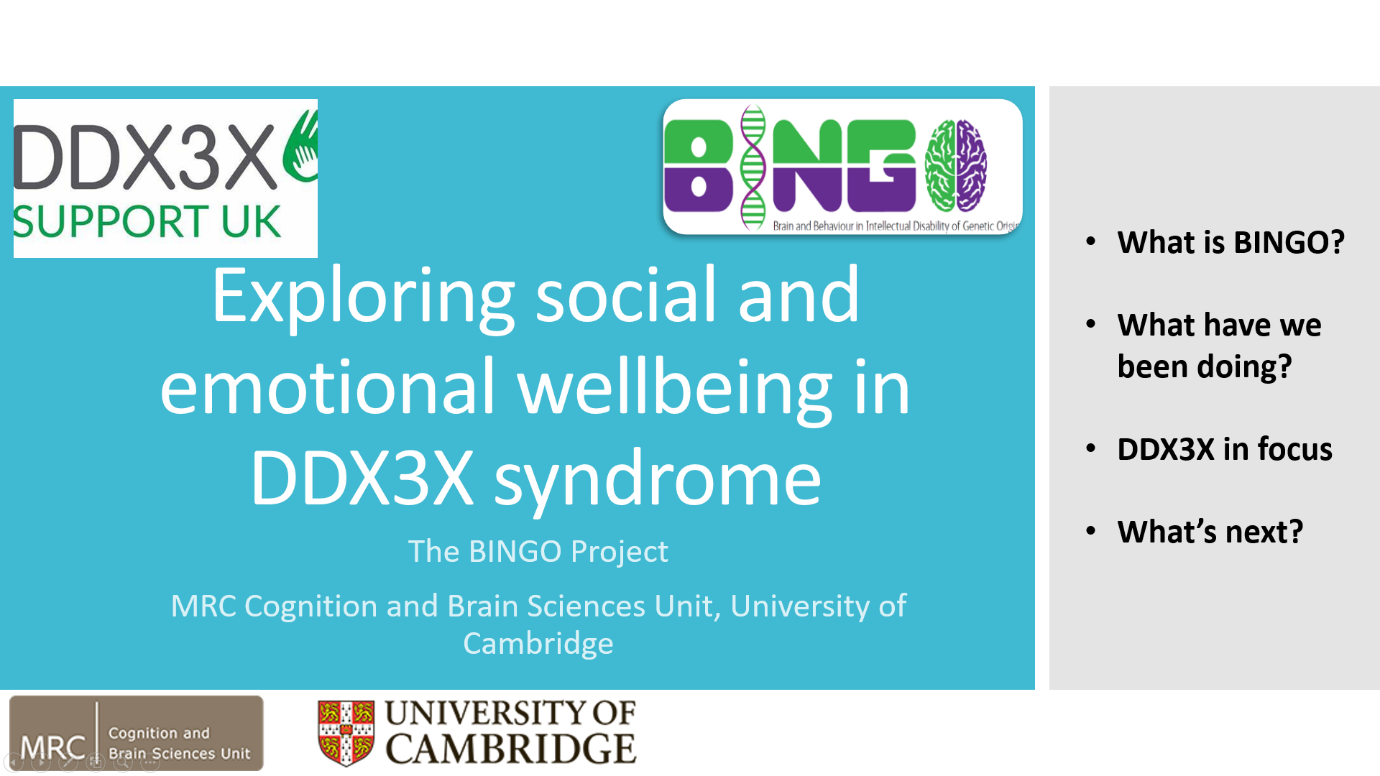 Last month, we were delighted to be able to present our latest research at a meeting with the DDX3X Support UK group. Families from all around the world tuned in to hear about our work, share their experiences and discuss research priorities.

DDX3X syndrome is a neurodevelopmental disorder caused by variants to the DDX3X gene, which is located on the X chromosome. It usually affects girls and women, and is estimated to account for 1-3% of unexplained intellectual disability (ID) in females. As a relatively common cause of ID in females, this condition has garnered increasing interest since its discovery in 2015. However, relatively little is known about the social and emotional experiences of girls and young women who are affected.

Although this is still a work in progress, so far we have found that the experiences of girls and women with DDX3X syndrome are wide-ranging: there is often as much variability in communicative, social, and motor functioning within DDX3X as there is across other disorders. At the same time we have found that some emotional and behavioural difficulties, such as anxiety and self-injurious behaviour, may disproportionately affect girls and women with DDX3X syndrome.

After the presentation, families provided much-valued feedback, and discussed priorities and directions for future research. Many parents wanted to know more about how social and emotional well-being develops over time for individuals with DDX3X syndrome, while others said that they would like to see more research on how DDX3X syndrome affects boys and men. This discussion was incredibly important, as we always want our work to address the issues that are most important to families affected by genetic conditions and ID.

Right now, our group is focusing on writing up these findings for publication. We hope this will increase awareness and understanding of DDX3X syndrome, and help families and professionals support development and well-being for people with this condition. Dynamic connectivity in functional brain networks is a fundamental aspect of cognitive development, but we have little understanding of the mechanisms driving variability in these networks. Genes are likely to influence the emergence of fast network connectivity via their regulation of neuronal processes, but novel methods to capture these rapid dynamics have rarely been used in genetic populations. The current study redressed this by investigating brain network dynamics in a neurodevelopmental disorder of known genetic origin, by comparing individuals with a ZDHHC9‐associated intellectual disability to individuals with no known impairment. We characterised transient network dynamics using a Hidden Markov Model (HMM) on magnetoencephalography (MEG) data, at rest and during auditory oddball stimulation. The HMM is a data‐driven method that captures rapid patterns of coordinated brain activity recurring over time. Resting‐state network dynamics distinguished the groups, with ZDHHC9 participants showing longer state activation and, crucially, ZDHHC9 gene expression levels predicted the group differences in dynamic connectivity across networks. In contrast, network dynamics during auditory oddball stimulation did not show this association. We demonstrate a link between regional gene expression and brain network dynamics, and present the new application of a powerful method for understanding the neural mechanisms linking genetic variation to cognitive difficulties.

This study has been published in the journal Human Brain Mapping. You can read the full paper here. We are really pleased to announce that we have recently published a new paper – STXBP1-associated neurodevelopmental disorder: a comparative study of behavioural characteristics – in the Journal of Neurodevelopmental Disorders.

It is now possible to identify a specific genetic disorder in around 50% of individuals with intellectual disability. However, we are at a very early stage of understanding the links between each genetic disorder, brain development, cognition and everyday difficulties.

De novo loss of function mutations in STXBP1 are a relatively common cause of epilepsy and intellectual disability (ID). However, little is known about the types and severities of behavioural features associated with this genetic diagnosis. To address this, researchers from the MRC CBU travelled across the UK to visit families of 14 young people with ID caused by STXBP1 mutations. They collected systematic phenotyping data encompassing neurological, developmental, and behavioural characteristics, using standardised questionnaires supplemented by researcher observations. To isolate discriminating phenotypes, the STXBP1 group was compared to 33 individuals with pathogenic mutations in other ID-associated genes.

A particularly striking feature of the STXBP1 group, with reference to both comparison groups, was preservation of social motivation. Participants in the STXBP1 group consistently showed great enjoyment of social interactions with family members, and demonstrated reciprocal behaviours such as sharing and turn-taking. Members of the research team also observed that, participants wanted to engage with the researchers (a novel stranger within the participants’ home) particularly in social activities such as drawing, dancing, singing, and playing games.

To take these observations forward, our group is now planning to explore the mechanisms linking motor, speech, and social development in STXBP1 and other disorders caused by genes in the synaptic vesicle cycling pathway. Understanding the developmental emergence of behavioural characteristics in these groups could help to focus clinical assessment and management, with the long-term aim of     improving outcomes for patients and families.

You can read the full paper here. On Tuesday 18th June the MRC CBU hosted the Brain and Cognitive Development Day with a fantastic line-up of speakers discussing about emerging frontiers and methods in developmental cognitive neuroscience. Many researchers  across departments of Cambridge Neuroscience  presented their work and shared  ideas on how to move the field forward. Here is a snapshot of our very own Dr Kate Baker introducing the Genomic Disorders and Cognitive Development Group.

28 February 2019– we celebrated the #RareDiseaseDay A day dedicated to raise awarness and show our support for families and carers around the world that are affected by rare diseases. More information about initiatives and rare disorders can be found here: https://www.rarediseaseday.org/.

In 2015, Kate Baker and colleagues published the first report of a child with severe disability and a mutation in Synaptotagmin 1 (SYT1).  SYT1 is the critical molecular trigger for fast, synchronous neurotransmitter release, highlighting an important new mechanism for developmental disorders.

Following this first case report, genomic testing laboratories around the world began to look for similar cases.  By 2017, ten more young people with SYT1 mutation had been identified in Europe, the USA, Jordan and Australia.  Kate worked with these international clinical centres and with parents to collect detailed information about each child.  Although every family has its own unique story, there are strong similarities between the problems experienced by children with SYT1 mutation.  For example, most of the children do not use speech to communicate, spend a lot of time chewing their fingers, and are described as “unpredictable”, switching from calm to agitated for no obvious reason.  Another striking similarity is an unusual pattern of brain electrical activity, not seen in other neurodevelopmental disorders.  These similarities mean that SYT1-associated neurodevelopmental disorder can be confidently diagnosed in future.

To understand how SYT1 mutations identified in these children affect brain function, Kate teamed up with Sarah Gordon, a synaptic physiologist at the Florey Institute of Neuroscience and Mental Health in Australia.  Sarah and her team found that each of the SYT1 mutations affects brain cells in slightly different ways.  However, when any of the mutations is present alongside some normal SYT1 protein (which is the situation for patients), electrically-stimulated neurotransmitter release is slowed down.  The mutations causing the biggest “slow-down” were found in children with the most severe neurodevelopmental problems, suggesting a direct link between SYT1 function, neurotransmission speed and cognitive development.

Over time, we hope to understand how SYT1 mutations and neurotransmitter release speed affect specific brain systems and cognitive skills such as action control and communication.  The ultimate goal is to discover safe and effective therapies for children with SYT1-associated neurodevelopmental disorder and related conditions.

The results of this integrated genetics and neuroscience project have been published in the journal Brain. You can read the full paper here.

6 months into the programme, I decided to start a blog! K.B.

Here are the most recent publications from our group:

Department of Paediatrics and Psychiatry

Link to the program

Come and find us during the Unit Open Day on 15th June!

More details can be found here