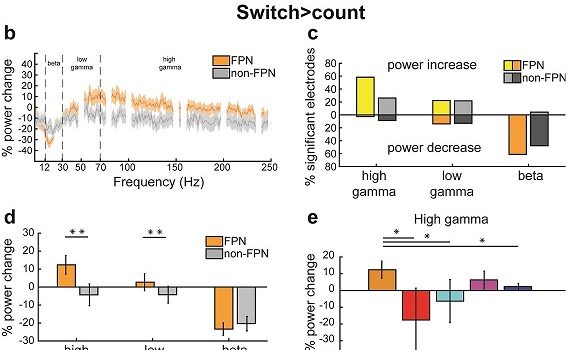 Intraoperative mapping during awake neurosurgeries guides the resection of brain tumors to minimize the loss of healthy tissue and preserve brain function. This is usually done through “zapping brains” i.e. sending a weak electrical current, and thereby temporarily switching off certain areas. If patients stop being able to do basic things, such as counting or moving their fingers while a certain brain area is silenced, then the surgeon knows not to remove it in order to preserve the functions this brain area is responsible for. Hence, mapping is commonly utilized for functions with clear behavioral responses such as language and motor functions. But how can the neurosurgeon avoid cutting out brain tissue involved in less basic, subtler cognitive functions, such as cognitive control. Cognitive control refers to the processes underlying flexible and goal-directed behavior such as attention and problem-solving. For example, the ability to concentrate, or to switch attention from one task to another.

To solve this problem we adapted an approach from non-invasive functional MRI (fMRI) studies. A consistent observation from these studies is that comparing brain activity for hard vs easy cognitive control tasks activates a network of distributed frontal and parietal regions (FPN). Our difficult task was asking the patients, after placing electrodes on their frontal cortex, to alternately count numbers and letters: “1, a, 2, b, 3, c…”. This task is already tricky enough when you are not undergoing a brain surgery – just see how far you can go yourself! The results revealed that high-frequency electrophysiological signals (high-gamma) increase in power selectively in FPN within the frontal lobe. Our approach thus can provide complementary information, and reduce the need for “zapping” and its associated risks, to guide stimulation and clinical decision making, especially for cognitive control functions.

Also excitingly, our results have implications for basic neuroscience work. The frontal lobes are considered the seat of human intelligence. But the functional organization of the frontal cortex remains puzzling and mostly only chartable using non-invasive fMRI signals. Our invasive electrophysiological results are a rare confirmation of fine-grained functional parcellation of cognitive control regions in the lateral frontal cortex.