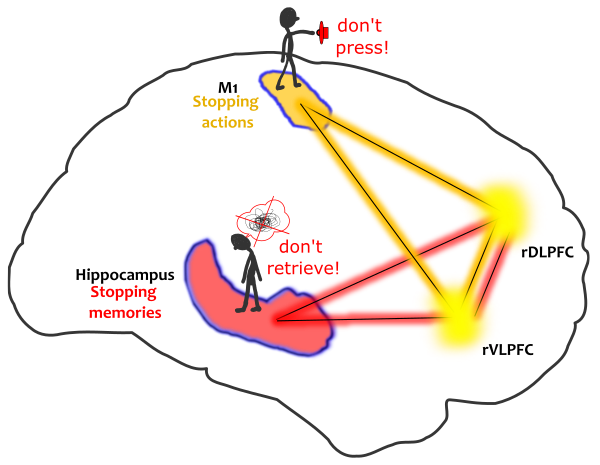 We stop our hands from touching a hot stove and stop unpleasant memories to avoid pain. Researchers from the MRC Cognition and Brain Sciences Unit, University of Cambridge, reasoned that a single regulatory mechanism in the brain might support the vital ability to control both our actions and memories. Nevertheless, moving our bodies and remembering the past involves different areas in the brain. The primary motor cortex enables us to move, but the hippocampus allows us to remember. If there were a single mechanism controlling both our actions and memories, such mechanism should dynamically target the primary motor cortex for inhibiting actions and the hippocampus for inhibiting memories. The Cambridge team and their colleagues were the first to test the existence of such dynamic targeting, which is fundamental to domain-general inhibitory control.

The research team used functional magnetic resonance imaging to measure the brain activity processes of research participants performing action stopping and memory stopping tasks. The results revealed that the right prefrontal cortex engages similarly whether participants stop actions or suppress memories. The engagement of the prefrontal cortex was also linked to how efficient individual participants were in both stopping unwanted actions and suppressing unwanted memories. Furthermore, the prefrontal cortex dynamically targeted inhibition of the primary motor cortex during action stopping and the hippocampus during memory stopping.

These findings indicate that, on the one hand, deficits in both action and memory stopping should arise with dysfunction in the right prefrontal cortex. Persistent intrusive thoughts and motor inhibition deficits co-occur, for example, in obsessive-compulsive disorder or addiction. On the other hand, dissociations in the abilities to suppress unwanted actions and memories should arise when dysfunction selectively disrupts a domain-specific target region. For example, a person with an impaired motor cortex following stroke would have problems with motor actions but not necessarily have compromised memory control. Or a person with an overactive hippocampus, as observed, for example, in schizophrenia, might have uncontrolled thoughts but not necessarily problems with motor control.

Overall, this novel work supports the existence of a domain-general inhibitory control system in the right prefrontal cortex and establishes Dynamic Targeting as a mechanism enabling this ability.