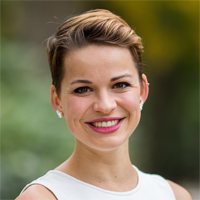 Congratulations to Sofia Carozza from the MRC Cognition and Brain Sciences Unit, who has received a commendation for her article, titled ‘shining a light on childhood adversity’, submitted to the MRC’s 2021 Max Perutz Science Writing Award. The award aims to encourage and recognise outstanding written communication by MRC PhD students.

Sofia said “I’m really grateful for the encouragement of my group, without which I wouldn’t have decided to enter, and the unfailing guidance of my supervisors, Duncan Astle and Joni Holmes. It was a great experience that helped me learn the challenges and joys of science communication.”

Shining a light on childhood adversity – Sofia Carozza
“What’s wrong with you?” An exasperated prison officer stands before Taylor as the 15-year-old girl curls up on the ground. Unspoken, but even louder, is the officer’s implicit answer to her own question: You are messed up.

The scene is a familiar one from my years of volunteering in a juvenile prison, where meltdowns, fights, and refusals marked the passing hours. Within those walls, authorities regularly echoed the question of the officer, and specialists answered them with a laundry list of difficulties and diagnoses.

But merely naming her difficulties does not explain why Taylor was in a crisis that afternoon. To go to the heart of the matter we must adopt what is called a “developmental perspective,” a gaze that considers the life history of a person. In Taylor’s case, this history includes repeated experiences of violence within her family, whose income fell well below the poverty line.

Why is her history of adversity relevant? Because who we are today is a function of what we have experienced in the past. Each of our lives is a unique tapestry, painstakingly woven together over time with the colourful threads of our genetic makeup and our life history.

Nowhere in the body is this more evident than in the brain. The first steps of brain development unfold according to a genetic blueprint while a baby is still in the womb. Then, as the child grows older, a new artist begins to guide her brain development: experience. The stimulation a child receives from her environment, the words she hears, the faces she sees, the loving care she receives, shape strong and
efficient brain networks.

What happens, then, in the brains of children who do not grow up in contexts of loving safety and abundance? We need not look far to find such children, because over half of the adults in the UK experienced at least one adverse event during childhood (like abuse or neglect) while one in five grew up in poverty. And a history of adversity increases the likelihood a person will suffer from mental and physical illness, as well as challenges like addiction, poor educational attainment, and incarceration. Given the science of child development, it seems likely that changes in the mind and brain serve as steppingstones on the path from early adversity to these later difficulties.

Yet scientists disagree over the details of this pathway. Which aspect of adversity has the power to change cognitive and socioemotional development? And how exactly does it get under the skin? A clear account would offer invaluable guidance to those who are striving to achieve justice and healing for children. The purpose of my PhD is to meet this need.

One reason for the disagreement is that a variety of experiences fit under the umbrella of “adversity.” So, for my first project, I set out to simplify this picture by identifying dimensions of adversity, or categories of adverse experiences that share important features. In other words, do the threads of adversity take common colours in the tapestry of life? If so, we could better recognise and reweave them into opportunities for resilience.

To answer my question, I first obtained data from the Avon Longitudinal Study of Parents and Children (ALSPAC), a large cohort study at the University of Bristol that includes rich measures of exposure to adverse experiences, such as abuse, neglect, domestic violence, and disruptions in caregiving. By choosing ALSPAC, I gained two advantages over previous work on early adversity. First, my statistical analysis would rest on a much larger sample size, strengthening the stability and credibility of my findings. And second, I could use reports of adversity gathered while my participants were growing up, rather than asking them to recall their past experiences after they had already reached adulthood, a common method of assessing adversity that is vulnerable to biases in memory.

Once the data was safely in my hands, I analysed it with a complex model called a network. One well known example is the social network, which captures patterns of relationships among people. I chose to use a network so that I could accommodate complex interconnections between adverse experiences, rather than yielding to the temptation to reduce the whole tapestry to a simple cross stitch. And critically, I could look for evidence of dimensions of adversity by testing whether the network contained any densely interconnected groups of variables.

As I had expected, I found two dimensions of adversity in the data. The first included measures of abuse and domestic violence, while the second included forms of inconsistent caregiving and financial difficulties. Adversity therefore seems to take two dominant colours in the tapestry of life: the warm threads of violence and the cool threads of deprivation.

Do these dimensions predict unique life outcomes? I thought they would: previous research found specific links between violence and emotional problems and deprivation and cognitive problems. But when I added measures of mental health and cognitive ability into my network, all of them grouped with childhood experiences of deprivation. And this pattern held up across the stages of childhood. So it appears that a broad path leads the way from early deprivation to a wide range of later difficulties.

These exciting results reveal that the cool threads of neglect and poverty are closely stitched into the fabric of child development. My study does, however, have a key limitation: I did not randomly subject my participants to experiences of deprivation. This, of course, would have been unethical. But with mere observation, we can only detect an association between deprivation and poorer mental health and cognition, not a causal relationship. I plan to overcome this obstacle in my second project by designing a computational model of brain development and testing the causal effects of early adversity.

But my initial findings already show us that we can help Taylor, and every child who grows up in situations like hers, by mitigating deprivation. This is an especially urgent task during the era of COVID- 19, when an economic downturn has exacerbated financial difficulties and stay-at-home orders have restricted social interactions. If we want to achieve justice and healing for all children, we must work to end the silent pandemic of deprivation. From advocating for political change to simply lending a neighbour a hand, each one of us can choose to contribute to re-weaving the threads of deprivation into new designs of resilience and flourishing for every child.