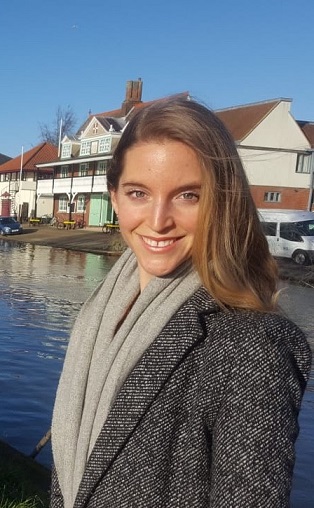 On behalf of the Medical Research Council (MRC) and the University of Cambridge, we are delighted to announce that Dr Camilla Nord has been appointed as a new Programme Leader Track Scientist at the MRC Cognition and Brain Sciences Unit (MRC CBU) from 15 October 2021.

Camilla will lead the new Mental Health Neuroscience Programme at the MRC CBU. Her lab focuses on the discovery of neural and physiological mechanisms driving mental health disorders, and developing novel, cognitive neuroscience-based interventions to improve mental health. She has a particular interest in bridging physical and mental health by targeting disturbances in brain-body interactions that arise across neuropsychiatric conditions. Camilla’s new programme is an exciting and important addition to the Unit’s long-standing excellence in mental health research and reflects the MRC’s ongoing commitment to this Priority Challenge.

Camilla first came to the MRC CBU three years ago as an MRC Investigator Scientist, before being awarded an AXA Research Fellowship to work on the computational underpinnings of mental health treatment. She obtained her PhD from the Institute of Cognitive Neuroscience, University College London, where she focussed on the role of the dorsolateral prefrontal cortex in major depression. Camilla is also a Fellow of Christ’s College, Cambridge, where she is Director of Studies for Psychological and Behavioural Sciences.

Camilla has received international awards for her work, including from the Society for Biological Psychiatry, and a Young Investigator Award from Brainbox in 2019. She is particularly dedicated to public communication of science, and received the British Association of Psychopharmacology Senior Public Communication Award in recognition of this work; her next major public communication endeavour is writing a popular science book on the neuroscience of mental health, which will be published by Penguin Press in 2023.

Camilla said “I am overjoyed to be able to lead an MRC Programme at the CBU. The MRC CBU is an environment like no other—I have the opportunity to work with brilliant scientists at the cutting-edge of cognitive neuroscience and clinical researchers dedicated to transformative, translational research in cognitive disorders. I feel immensely privileged for my work to be able to follow in the CBU’s outstanding history of synergy between basic and applied science”.

We are sure that you will all join us in congratulating Camilla on her appointment.