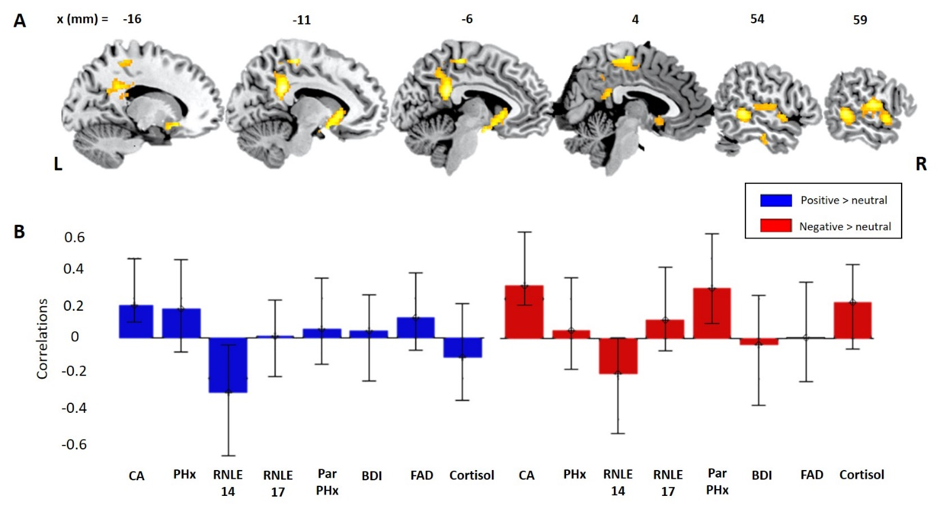 Depression is leading cause of disability worldwide. There are lots of different risk factors for depression; from biological ones such as genetics, to psychosocial ones such as childhood adversity. Depression is often first diagnosed in adolescence, so it is important to try and understand how the combined effects of risk factors interact with everyday emotional responses to social situations such as rejection and inclusion. Here, the team used a population-derived sample of adolescents to explore the relationships between biopsychosocial risks for depression, emotional response style and brain activity to being socially rejected and socially included. Using Partial Least Square regression and correlation models, we identified higher depressive risk was associated with a blunted emotional responses to both rejection and inclusion. This was linked to patterns of brain activity in emotional control regions of the brain. Importantly, these patterns held when we excluded adolescents who had already been diagnosed with a psychiatric disorder, a high-risk subsample that had effectively navigated adolescence without reporting mental health difficulties. Thus, this study suggests that a blunted emotional response style to everyday social situations, together with increased activity of emotional control regions of the brain, may be a potential marker of resilience in adolescents at risk of depression.