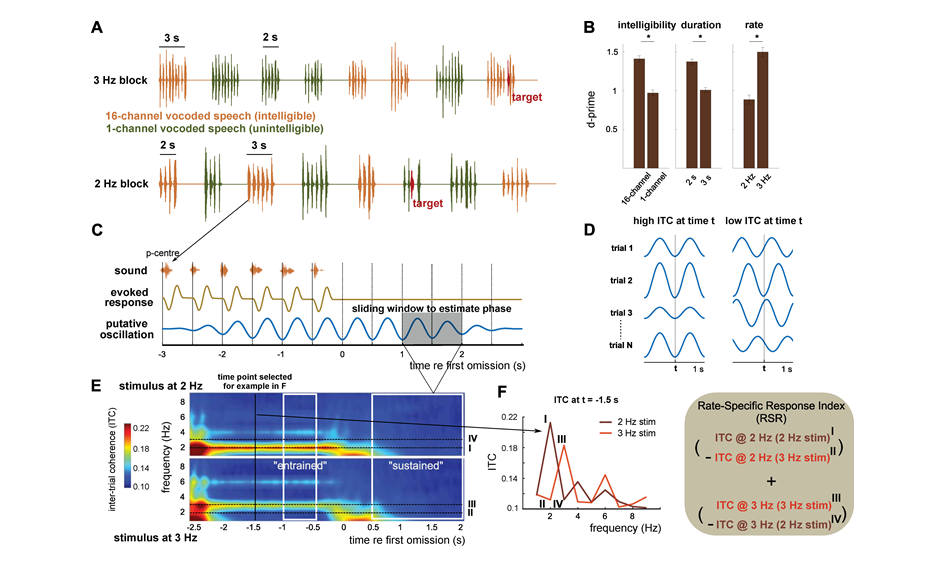 When the brain encounters a rhythm—for instance, through music, or direct electrical stimulation—it aligns its oscillation patterns (‘brainwaves’) to the beat. However, it is unclear if these stimulus-aligned brain responses are internally driven—through the brain’s own underlying patterns of activity—or if they are evoked by the rhythm of the stimulus itself. In this study, researchers aimed to clarify the difference between evoked rhythmic activity and the brain’s intrinsic oscillation patterns. Using a functional brain-imaging technique called magnetoencephalography (MEG), van Bree and colleagues looked at how brain activity changed before and after rhythmic stimulation, and whether these effects lasted longer than a rhythmic stimulus was presented. In the first experiment of this study, participants listened to intelligible and unintelligible speech. Rhythmic, intelligible speech was found to produce an oscillatory response that outlasts the stimulus in the parietal lobe of the brain. In their second experiment, the researchers stimulated participants’ brain activity using transcranial alternating current stimulation (tACS). They found that electrical stimulation changed the way that participants perceived speech: rhythmic stimulation produced rhythmic changes in speech perception. These results revealed that the effects of rhythmic brain stimulation—whether through auditory perception, or an electrical current—last beyond the duration of a stimulus, meaning that endogenous oscillations in the brain ‘carry’ the rhythms that we encounter. Therefore, endogenous neural oscillations are a key underlying feature of speech perception, and they are dependent on the rhythmic variations in speech that we encounter on a day-to-day basis. The more we know about how the brain processes speech, the closer we get to being able to treat disorders of speech perception, which affect communication and quality of life.