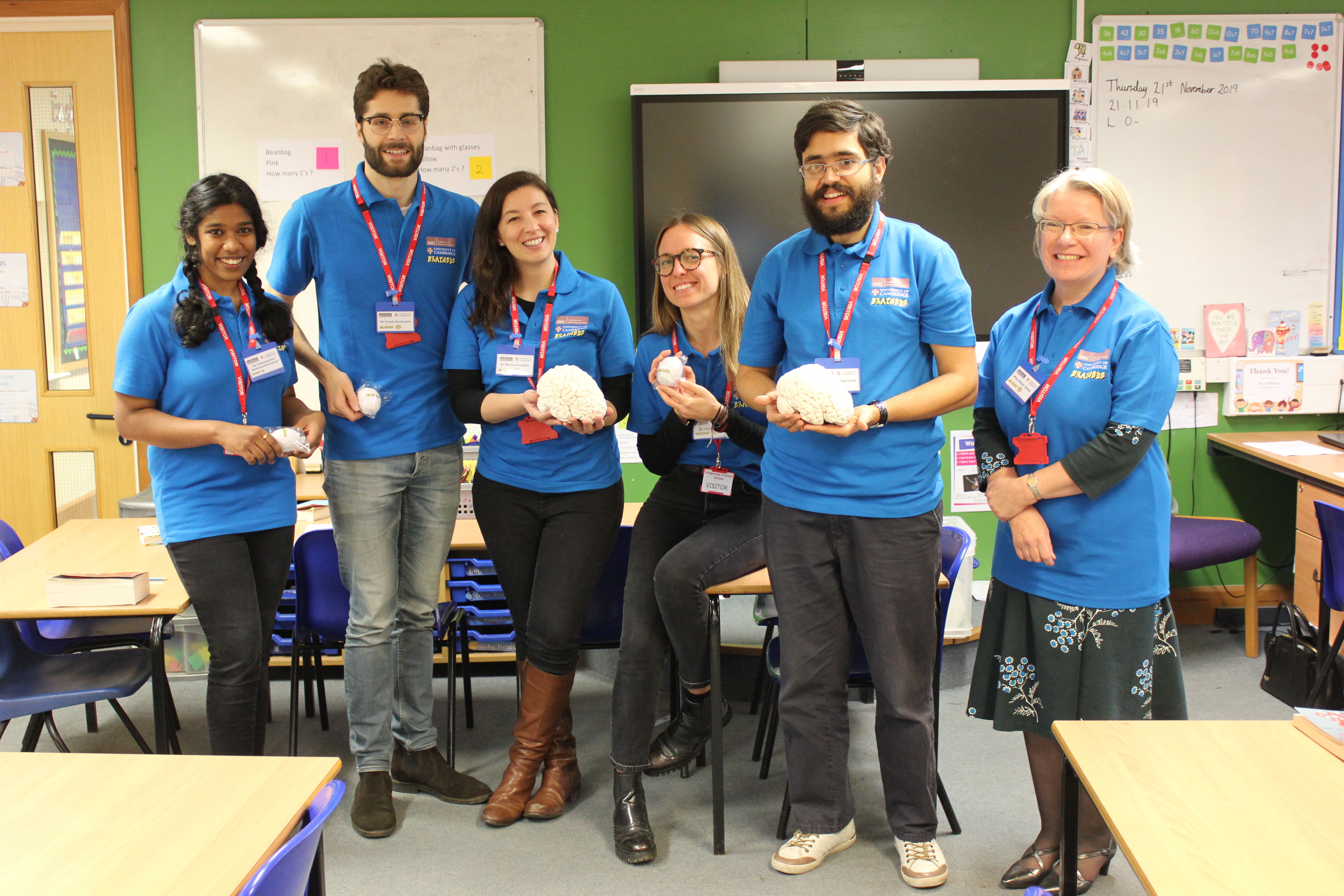 children, exposing them to subjects, careers and role models which they would not otherwise access. The project brings a range of diverse neuroscientists and purpose-designed interactive neuroscience activities into the primary classrooms, at no charge to the schools. The aim is to start a cascade of experiences to support underrepresented individuals, including those from ethnic minorities and less privileged socio-economic backgrounds, to engage in science and, eventually, higher education and science careers. The initial BrainBus team have recruited a large number of volunteers from different areas within the MRC CBU to take part in the visits, each taking on various different roles. The team have so far interacted with 100 key stage 2 pupils, across two school visits within Cambridgeshire which several more schools lined up over the coming year.

A classroom-based activity programme has been carefully developed by the BrainBus activity team. The activities were then subsequently modified and fine-tuned following specialist training activity team members received from education and outreach experts at the University of Cambridge and Eloquential. The visits consists of a short informal presentation, teaching the children about different areas of the brain, followed by two hands on experiments. This includes a Stroop task and a perceptual distortion tasks. This gives the pupils a greater understanding of their brains, as well as an idea of what scientists might do, the skills they use, and the pleasure of finding things out. Another teaching technique includes using 3D printed brains of both humans and a variety of animals. Tailor made squishy brains with the BrainBus logo on have been designed and are given away to each participating student, as well as other objects that help the experience of ‘conducting an experiment’ such as clipboards and stopwatches.

So far, the visits have been well received by both the pupils and teachers. One teacher from a recent visit explained how she felt about the BrainBus project: “It was really informative – children were all really engaged and enjoyed themselves.’

The fun, engaging and educational environment was also recognised in the feedback from the pupils. One pupil said “My favourite part was doing the tapping game with the stopwatch because we don’t usually do that.” Another pupil explained their favourite part of the day was simply “learning about the brains because I found it interesting how unbelievable it is that there is brains.”

Volunteers from the Unit have also enjoyed reaching out with schools saying “I think BrainBus is brilliant, the teachers seemed really grateful and the children were engaged. It is a very valuable addition to my work experience and I was really grateful for the opportunity.” Another volunteer said “it has made me think about how to communicate the findings of our research to not just a non-scientific audience, but also a younger audience.”

Rogier Kievit/ Kate Baker, BrainBus project leads said “We hope that BrainBus will help in allowing children from all backgrounds to consider a career in science as something they consider to be possible for them. We are excited at how much the teachers and children have enjoyed it so far, and are working on how to further expand our reach”.

The ultimate long-term goal of the BrainBus project is to achieve a lasting change on the extent to which children from all backgrounds consider a career in science as something they consider to be possible for them.