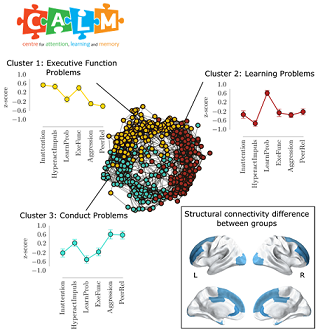 Over 20% of children will experience some problems with learning during their schooling that can have a negative impact on their academic attainment, wellbeing, and longer-term prospects. Traditionally, difficulties are grouped into diagnostic categories like attention deficit hyperactivity disorder (ADHD), dyslexia, or conduct disorder. Each diagnostic category is associated with certain behaviours that need to be present for the label to be applied. However, children’s difficulties often span multiple domains. For instance, a child could have difficulties with paying attention in the classroom (ADHD) and could also have a deficit in reading (dyslexia). This makes it difficult to decide which diagnostic label is the most appropriate and, consequently, what support to provide. Further, there can be a mixture of difficulties within a diagnostic category. For instance, children with ADHD can have mostly deficits with inattention or hyperactivity, or both. This heterogeneity makes research on the mechanisms behind these disorders very difficult as each subtype may be associated with specific mechanisms. However, there is currently no agreement about the presence, number, or nature of subtypes in most developmental disorders.

In a recent study, Joe Bathlet, Joni Holmes and Duncan Astle applied a new approach to group behavioural difficulties in a large sample of children who attended the Centre for Attention, Learning, and Memory (CALM). This sample is a mixed group of children who were referred because of any difficulty relating to attention, language, learning, and/or memory. The parents of the children filled in a questionnaire that is often part of the assessment that informs the advice of education specialists on the most appropriate support for a child. The questionnaire contained questions like “Forgets to turn in completed work”, “Does not understand what he/she reads”, or “Does not get invited to play or go out with others”. In our analysis, we grouped children by the similarity of ratings on this questionnaire using a data-driven algorithm.

We also investigated if the behavioural profiles identified through the algorithm also show differences in brain anatomy. We found that white matter connections of the prefrontal and anterior cingulate cortex mostly strongly distinguished the groups. These areas are implicated in cognitive control, decision making, and behavioural regulation. This indicates that the data-driven grouping aligns well with biological differences that we can investigate in more detail in future studies.

The full paper can be read here: JAACAP – Full Article

Following the study and the paper published in JACAAP, a  fantastic editorial has been written about the paper explaining the importance of the approaches being  taking at CALM. The editorial can be read here: JAACAP Editorial