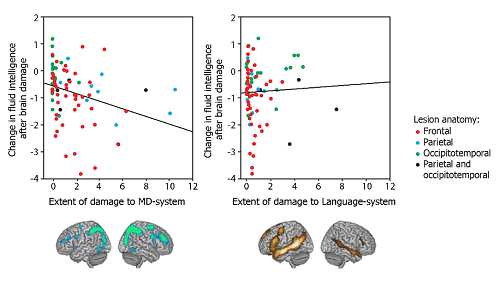 What is the neural basis for complex thought? Philosophers, psychologists and cognitive scientists have long argued over whether or not our ability to think depends on our language system.

Fluid intelligence, measured by tests of novel problem solving, is proposed to depend on a set of frontal and parietal ‘multiple-demand’ (MD) brain regions which are active for many types of cognitive demand. However, frontal and parietal cortices also contain nearby brain regions that selectively support language processing. So it is possible that the language system is instead the foundation of complex thought, and perhaps it is damage to these language-specific, and not domain-general MD, regions that causes fluid intelligence loss.

An international team of scientists from the MRC Cognition and Brain Sciences Unit (Cambridge University, UK), Macquarie University (Sydney, Australia), Harvard Medical School (MA, USA), and Favaloro University (Buenos Aires, Argentina), worked together to resolve this question. The scientists drew on large fMRI datasets to construct probabilistic maps for the MD and language systems. They then compared brain scans of 80 patients with focal brain injury to each of these maps, in order to establish the extent of damage to MD cortex vs. language cortex. In an study published today in Nature Human Behaviour, the team found that the extent of damage to the MD-system predicted fluid intelligence loss after brain injury, whereas damage to the language system did not. Conversely, only damage to the language system predicted performance on a language task, indicating a double dissociation between the two brain systems.

Alex Woolgar, the lead author on this paper, will be joining the MRC Cognition and Brain Sciences Unit this spring. She said: “Both our language abilities and our intellectual prowess set humans apart from other animals. Building on prior work that has linked fluid intelligence with frontal and parietal cortices, our paper shows that fluid intelligence is specifically associated with the domain-general MD system, and not the language system. These results undermine claims that language is at the core of human sophisticated reasoning abilities.”

The full article can be read here: Fluid intelligence is supported by the multiple-demand system not the language system – Woolgar A, Duncan J, Manes F, Fedorenko E.