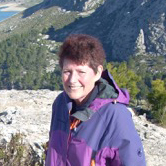 Professor Vicki Bruce of Newcastle University was announced as Dame Commander of the British Empire, for services to Higher Education and Psychology in the 2015 Queen’s Birthday Honours List. Vicki spend three years at the MRC Applied Psychology Unit (now the Cognition and Brain Sciences Unit)

studying for a PhD completed in 1977, supervised by the Director, Alan Baddeley. It was under Alan’s supervision that she first became intrigued by the paradox of human face memory, often so good in the laboratory but error-prone in the eye-witness to a crime. She has spent the remainder of her career researching human face perception and person memory, including the use of face images in forensic contexts, as well as other aspects of social cognition. In the past she also conducted research for the Royal Mint to ensure that new UK coins can be distinguished from each other by sight and by touch.

Vicki served on the Council of the ESRC and committees of the MRC. She was chair of the Psychology RAE panel in 1996 and 2001, and of ‘main panel K’ in the 2008 exercise. She chaired the Social Sciences panel for the Hong Kong RAE in 2014.

She was awarded the OBE for services to Psychology in 1997.