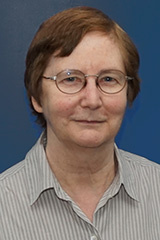 Congratulations to Professor Anne Cutler who has been made a Fellow of the Royal Society (FRS).  Anne worked at the CBU for 10 years during the 80s and 90s before leaving the Unit to become director of the Max Planck Institute of Psycholinguistics in Nijmegen. She is currently back in her native Australia where she is a Research Professor at the MARCS Institute, University of Western Sydney.

Becoming an FRS is one of the most prestigious scientific achievements for scientists in the UK and the Commonwealth. The text of the Royal Society’s announcement states that “Anne Cutler has explained some of the major puzzles concerning how listeners decode speech. She was the first to demonstrate that the mother tongue determines the way speech is segmented into units and that these units are different in different languages (syllable, stress, mora, respectively in French, English and Japanese). She has demonstrated that listeners adapt quickly to phonemic categories with different speakers and that this is done on the basis of abstract representations, and not episodic exemplars. She has also shown how prosodic context aids segmentation of the speech stream and has embedded a vast array of experimental findings into a coherent and widely accepted theoretical framework.”

Much of this research began during her time here at the CBU and she is still actively involved in collaborations with scientists at the Unit. We are delighted to congratulate Anne on this wonderful recognition of her achievements.